Writer of the Month: Q&A with Anjanette Delgado 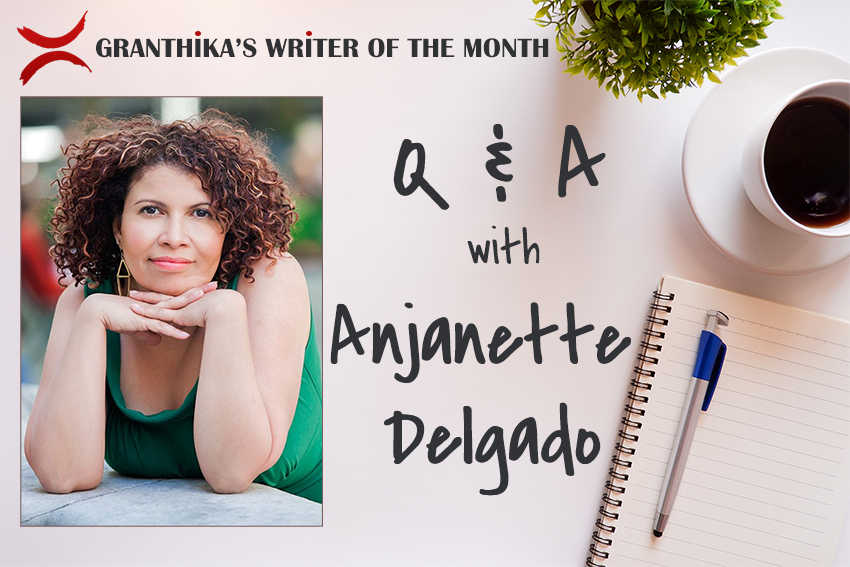 Anjanette Delgado is a Puerto Rican writer and journalist. She is the author of The Heartbreak Pill (Simon and Schuster, 2008), 2009 winner of the Latino International Book Award, and of The Clairvoyant of Calle Ocho (Kensington Publishing & Penguin Random House, 2014). Her work has appeared in numerous anthologies, as well as in The Kenyon Review, Pleiades, The New York Times (Modern Love), Vogue, The Hong Kong Review, NPR, and HBO, among others. A Bread Loaf Conference alumni, she won an Emmy Award for her writing in 1994, served as a judge for the Flannery O'Connor Short Fiction Award in 2015, and was a Peter Taylor Fellow in Fiction in 2016. This year, she is nominated to a Pushcart Prize for her short story, “Lucky.” She holds an MFA in Creative Writing from Florida International University and lives in Miami, Florida.

Every writer has their own writing process and their idiosyncratic habits when working on a novel. Tell us about yours.

Because I wrote for television before I wrote for the page, I visually create the world in which I'm going to develop my story. I do a casting (pictures from magazines), I look at maps and make my own map of the places of the novel, I find songs and smells, and so on.

Has your process evolved over the years?

A little. These days I don't do a lot of research until I have at least 100 pages. I try to figure out why I want to write the story first. What I want to say. Then I research in order to adjust those initial instincts.

Which do you find harder: laying out your writing for the first time, or revising/re-organizing what you wrote?

Laying it out for the first time. The discovery of what wants to be said is hard because the part of me that hides is such an obstacle to the side of me trying to find the story.

Do you re-read your work after it has been published? Do you find that painful?

I do. For me the pain comes before it gets published. Once it’s out there, there’s nothing I can do about it and I tend to relax.

Your works are being adapted for TV and film? Does it help the "adaptation process" that you had already started off with a casting, music selection etc. or do you  typically "surrender" your work to a new creative treatment by screenwriters?

My work has been adapted in the past. Presently one of my works is optioned to be adapted. And a short I wrote was produced as a short movie earlier this year. But my casting and mapping is a very raw process to help me find the story. It isn’t something I would share with a producer who has specific targets in mind.

Do you find yourself eager to experiment with new creative techniques and new tools?

I do, but I don't go crazy trying things. Granthika was particularly interesting to me because it is simple and allows me to work in the same way I normally work, which is to say, organically, adding elements as I go.

What is something new you tried recently in regards to your creative process?

Granthika is one of those things I tried recently. I also tried Trello as a place to house all the visual and digital elements of my world construction.

Have you ever had difficulties finishing a story, or book?

Of course. Absolutely. Every time.

What helped, and what didn’t help?

Reading helped. Being able to organize every element of the project in one or two places helped. Doing too much research as a way to procrastinate writing didn't help.

You are both a fiction writer and a journalist. How are your approaches to writing a fiction and a non-fiction piece different?

With fiction, there is more for me to discover. I plan more, but I also search more. Just recently, I worked on a story, reworking the first four pages about seven times, renaming the lead character, changing her profession. On the fifth week of working on this story, the reason I was writing it emerged. What I needed to say was suddenly in the page, clearly, and I was amazed, but this was five weeks in.

With nonfiction, I start from a place of knowing and feeling, and then move into memory, as in what more can I remember about this to show what it was like, what it was really like.

How has the internet changed how you write (other than having enabled your research)?  For example: do you engage with your readers on social media? Do you run ideas by fellow writers online? Or do you prefer more traditional means of engagement and interaction ?

Certainly apps such as Granthika, and ready access to information via Google save time and allow writing to get done faster. But I am not a digital versus analog person. Instead, I interact with readers and with peers wherever they can be found. Some are present on social media. Others require emailing or getting together.

Writer events - conferences, festivals and book fairs are becoming increasingly popular. What are the ingredients for a high quality event for writers?

Fantastic faculty, enough time for writing after workshopping, and I happen to believe the more boring the location, the better.

Which ones do you look forward to?

Bread Loaf, Kenyon Review, Writers in Paradise. I have also been wanting to attend Vona, Sewanee, and Tin House for a while.

What tips would you give novice writers for navigating such events and making the best of them?

Don't go to every single event of the conference or take part in every activity. Give yourself space to hear yourself think, to generate, to write at least a few pages a day. A really good conference can be like a big museum. After a while, your brain stops processing the beauty of what you are experiencing if you try to cram in too much too quickly.

What project(s) are you currently working on?

Revising (rewriting) my third novel, which I am attempting to write in my native Spanish. It is more of a novella, which is also new for me.